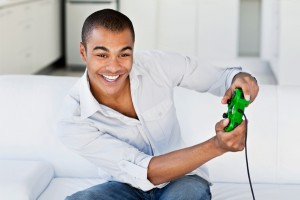 Video games have long been thought of as entertainment for children, but this standard has changed drastically in the last decade. Video games are now embraced by the adult world, particularly by those who played video games as kids. Not only do adults play video games, they can also easily become addicted to them. Many grown ups find themselves struggling with video game addiction in the present day. There are two different types of adult video game addiction: the kind that begin in adulthood and the kind that begin in childhood.

Video game addictions that began in adulthood are a whole different animal. These are introduced to a person later in life, typically by a friend or a salesperson, and the habit sticks. People who naturally enjoy games often take to video gaming quickly because it requires similar levels of hand-eye coordination. Soon, they are gaming to the point of excess. However, video game addictions that begin in adulthood are easier to manage. A person is able to break away cleaner from a recent addiction, where as they may struggle for years to end a life long addiction, only to relapse eventually.